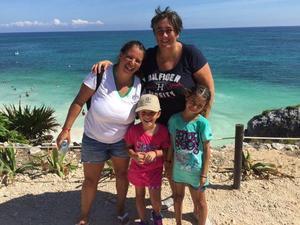 ‘For many years we have been coming to Punta del Este, for work and to enjoy a quiet break with the family. We always felt that the quality of life and the idea of time here were different…'

Silvina, Buenos Aires, Argentina.
'In the year 2016, after an unfortunate incident regarding our safety, we did not hesitate and decided to move to Punta del Este to raise our daughters.
We were faced with the task of finding an educational institution that was suitable to receive our homoparental family, a family that had already experienced a major change. So, for us, it was not just the academic part that was (and is) important, we were looking for a support system, something we perceived since the first meeting at International College. That day, we could not find the school (it was September 2016), and were arriving late for the interview. We called the School and Elena, Head of Secondary, laughed, saying ‘But dear, are you not in a grey car? You have passed by the School’s entrance five times already’.
When we finally arrived, we were warmly welcomed by Iara, Elena, Pedro and Belen. That is what convinced us to choose IC as the educational institution for our daughters.
In these two years that we were part of the IC Community we have realized that we were not mistaken.
Today we must move countries again… and if there is one thing that I must say, it is THANK YOU. Thank you to each and every one of the people from IC who have known how to leave a great mark on this family, and especially on my daughters, who have been able to assimilate that the academic part is very important but that if you learn something by playing, you learn it better. They have been able to share experiences with children from almost all nationalities and races. These are things that this family will remember forever.´